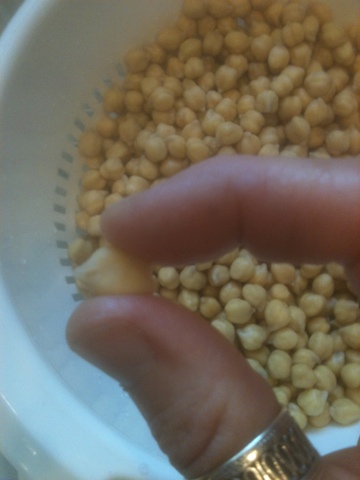 The Chick Pea, also known as the garbanzo bean!

The Chick pea as stated in Wikipedia:

The chickpea (Cicer arietinum) (also ceci bean, garbanzo bean, chana, sanagalu Indian pea, Bengal gram) is a legume of the family Fabaceae, subfamily Faboideae. Its seeds are high in protein and it is one of the earliest cultivated vegetables; 7,500-year-old remains have been found in the Middle East.[

I am intimately connected with chick peas, as they are a staple in the Middle Eastern diet, which I grew up on.  The chick pea is the base for hommus, most of us know hommus  as the mid-eastern dip that is pureed into a lovely whip of tahini, lemon, garlic and sometimes cumin then sprinkled with any variety of spices such as paprika, Zataar (a mid- eastern finishing spice) or for a kick, cayenne . It is spread on sandwiches, dipped with chips, dunked with pita, scooped with veggies or just dolloped up with our fingers, because the combination (if done correctly) creates a symphony of flavor in one’s mouth!

The Chick pea’s versatile nature allows it to be created into a variety of delectable’s such as another middle eastern staple, Falafel. Falafel is a vegetarian fritter that is mixed with spices and herbs and shaped into either a fritter or a ball and deep-fried. It is then made into a pita sandwich with lettuce, tomatoes, onion, and a yummy tahini sauce. The Greeks use a yogurt sauce called tzatsiki, for their version of a falafel sandwich.

Enjoy the chick-pea in stews, as they do in the Indian dish called Channa Masala. Or use the garbanzo in salads or saute’s as the Italians do. Anyway you prepare this little bean it is sure to pack a big punch of flavor and is a viable alternative for protein. Low in fat and high in nutrition.